Backstage at the ski club

“Rider ready? 3… 2… 1… Go!” And off he goes! The first racer zooms out of the start gate down the perfectly prepared slope at Zwölferkogel mountain and the clock starts ticking. The members of the Ski Club Saalbach Hinterglemm bring plenty of World and Euro Cup experience to the table, so a giant slalom for the British police force is really a routine affair. And yet, the preparations for the race, right up to the countdown to the moment when the first skier takes off out of the gate, are enormous. I myself was part of the ski club’s racing team for several years and came to visit my former colleagues in order to take a peek behind the ski club’s curtains on behalf of Saalbach Stories.

With 103 trained and certified referees, Skiclub Saalbach Hinterglemm is the biggest club of its kind in the Austrian province of Salzburg. The experienced team organises an incredible 55 races per winter. “The majority of races are visitor races, such as corporate or club races. For that, a team of around 15 to 20 referees can do the job. For a euro cup or a world cup, we do, of course, need way more helpers, material as well as time,” the veteran president of the ski club, Bartl Gensbichler, explains to me, who acts as a race director today, deploys his team at their various positions and, at the same time, assists the “sliders”. With over a hundred experienced judges, at any rate, Saalbach Hinterglemm would be well prepared for the Alpine Ski World Championships 2025, for which candidature is running. The decision on the venue for the FIS Alpine World Ski Championships 2025 will be made in May at the 52nd FIS Congress in Thailand. 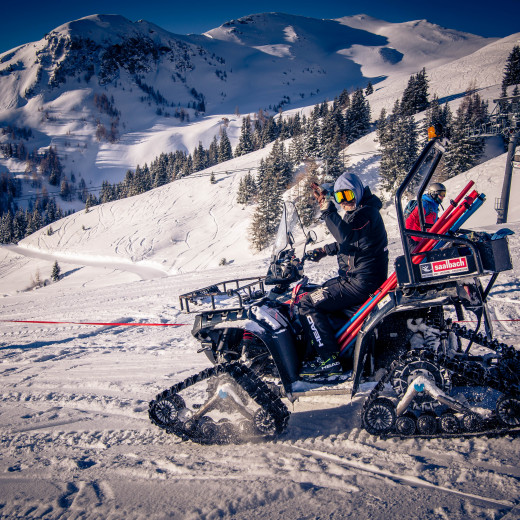 Fritz Steger preparing for the race.

Bartl Gensbichler pulls all the strings at the ski club - even on the slopes. 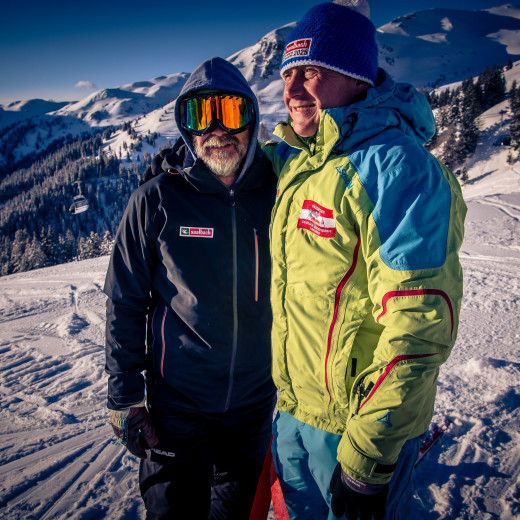 The job of the “Sliding Squad” is to zoom down the slope either in a snowplough or sliding sideways through the gates right after the skier, pushing loose snow off the race track. A dangerous and stressful job — for the sliders are going at it at extreme speeds in order to be able to leave the course as soon as possible and without interfering with the next race participant’s run. But their work ensures a perfect and smooth race track even for higher starting numbers. For the sliding process also gets rid of bumps and grooves. The gate post watchers are stationed just off the course. They meticulously observe their assigned gates and note every person passing through, as well as every incorrectly passed gate. They are also the ones who immediately report a fall or a pole breach. With this “start-stop” system, no racer is allowed to leave the start gate until the track has been cleared beforehand. A specially designated squad — the “Mobile Task Force” — is immediately on the spot with replacement poles, flags, shovels and a drill to fix the faulty gate. This particular course had already been designed and prepped earlier in the morning by Bartl Gensbichler himself and his setup team — for higher-end races, the course setter is chosen by the FIS. The barrier fence keeps the audience at a distance from the race and, in case of an accident, the racer within the crash zone. The faster the races, the more snow fences are needed — which is why, in the event of a World Cup, the setup team can spend several days installing these safety fences. 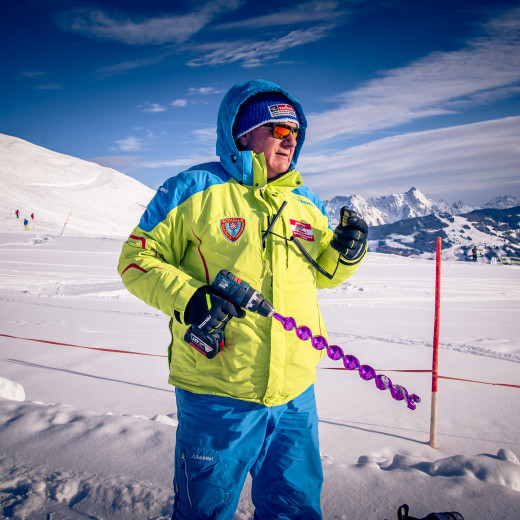 The starting position is connected to the finish line via radio, and once the starting antenna gets activated, the clock starts ticking for Stefanie Hofer. She monitors timekeeping and ensures that every participant is logged down to a hundredth of a second. A job that requires excellent nerves, for there can often be two to three racers on the course simultaneously. Each run must, of course, be recorded for the event of a claim or objection. Stefanie also manages the ski club’s office together with her mother Ulrike. That’s where new registrations come in, the team gets assigned to the various races, communication and organisation takes place, memberships are administered, and all start and result lists are printed. The last participant is currently racing across the finish line and without hesitation, the team begins to dismantle the gates, coil up the timekeeping cables and remove the barriers. And within a mere few minutes, tourists and holidaymakers are already zooming down the slope that had been the setting for a major slalom race just moments ago. 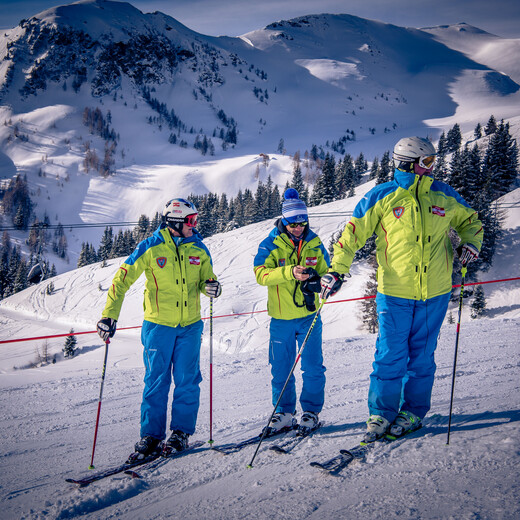 The slide squad in waiting position 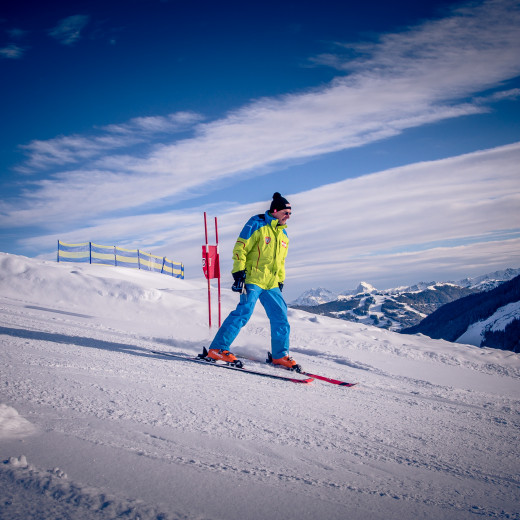 Former Mayor Peter Mitterer is also in the slide squad.

After each race, the team meets up for a well-deserved and cosy meal. The frozen fingers slowly begin to thaw and then there is also a brief follow-up chat. “With the Zwölferkogel mountain, Saalbach Hinterglemm has got the ideal setting for racing, and the collaboration with the local mountain lift companies is also great,” enthuses Bartl Gensbichler. The Zwölferkogel mountain has been the speed training centre of the ÖSV (Austrian Ski Association) for years. The vast terrain ensures that the execution of the races and training sessions does not disturb the public’s skiing activities and the site is frequently visited by international top teams who come here to train. Earlier today, for example, Lindsey Vonn from the US team hit the World Cup course. “Fritz Steger is not only my representative, but also the ski club’s slope expert — he’s our man on the mountain. While I try to use my skiing sports connections to bring a race or two to Saalbach Hinterglemm, Fritz already starts working on creating the perfect race slope in the autumn. He also gets up early and heads to the mountain to close off the track, ice over the slope once more or to remove freshly fallen snow from the race track together with his team. He’s a real one-man-show, also coordinating the top teams’ training sessions and — in collaboration with the mountain lift companies — makes sure that every ski celebrity arrives to perfect conditions. And when it comes to the future generations of referees, Bartl Gensbichler isn’t worried at all: “Everyone knows that this place lives off the ski sport. There is plenty that the younger generations can do to contribute. Many of them partake in the various races with a lot of enthusiasm. On a voluntary basis of course, like all the other members. Many even take time off work in order to help out at the ski club. Once it’s time for a bigger event at the Zwölferkogel mountain again, then we see how all the little races suddenly pay off, because then we’ve got our routine down to a T.”

Everyone is eagerly awaiting the next world cup race and the FIS Alpine Ski World Championship 2025 would be the crowning glory for the ski club's efforts in ski racing. Despite all the effort involved, despite the many voluntary working hours and despite the high pressure. For here at the Skiclub Saalbach Hinterglemm, each and every referee’s heart beats for skiing.

Those who would like to see the ski club in action soon will have the opportunity to do so at the AUDI FIS Ski Worldcup on February 13th and 14th on the Zwölferkogel.

Ripples in the snow