Alexandra “Meisi” Meissnitzer, an Abtenau native, can look back on a career filled with medals and trophies. As the overall World Cup winner, two-time World Champion, and with six medals from the Olympic Games and World Cups, these are only some of her many awards. Super-G, downhill run and giant slalom were her special disciplines in more than 300 world cup races. Austria twice named her the athlete of the year.

For Saalbach Stories, the charming athlete from Salzburg province took some time off for an interview after a day of skiing in the Skicircus Saalbach Hinterglemm Leogang Fieberbrunn. Since the end of the athletic career is 2008, Alexandra Meissnitzer has been working as a co-commentator and camera runner for the Austrian Broadcasting Corporation (ORF) and has also been representing Saalbach Hinterglemm as a brand ambassador since this winter. Full of excitement about the amazing skiing conditions, she launches into our conversation, “It’s absolutely fantastic for skiing! Just an amazing day in the snow.”

You’ve been the ambassador of the Skicircus Saalbach Hinterglemm Leogang Fieberbrunn since the winter season 2016/2017. What connects you to the region?

I am loving this partnership! As a Salzburg native and world champion, I am side by side with the Skicircus, which is now applying to host the World Cup. I was into the idea from the very beginning. Besides that, I see the Skicircus as an ingenious and highly innovative ski area with unbelievable diversity. I have seen many ski areas in my days, but Saalbach Hinterglemm is unique and inspiring. I consider it a great honour to have a partner like that.

During your many active years, you went through many injury-related ups and downs — how did you manage to always end up on top? Were you born with this fighting spirit?

Yes, I was. Stamina is a basic requirement for any ski racer who wants to — if it happens to not be going so well, or if you were injured in some way — get right back into the game. It wasn’t an easy time after my knee injury, there were moments when I almost got lost in desperation. But that’s where my sense of ambition came in. Once you get to celebrate another victory, you know that it was all worth fighting for. And you can apply this to any situation in life — one should never stick their head in the sand!

On 13 March 2008, you ended your career with the Austrian Ski Association (ÖSV) with bronze in the Super-G discipline in Bormio. But you never turned your back on your skis. What does skiing mean to you today, and what does an optimal ski day look like for you?

Today, I’m a typical 3-hour-skier and I also don’t let my ski day be affected by the weather. Sunshine is nice, but I don’t mind hitting the slopes when it’s snowing. The most important thing is to make it up the mountain as early as possible, when the slope is still freshly groomed. Then I make my awesome turns. And what’s absolutely crucial: going to the huts! Back in the day, I used to go back to my other training units right after the ski training. Today, I enjoy just being outside in nature in the most beautiful spots with my friends.

In the show Dancing Stars in 2011, you swapped your ski boots with dancing shoes and made it to 2nd place together with the professional dancer Florian Gschaider. Smooth parquet flooring instead of steep slopes — a difficult challenge?

That was definitely a challenge for me! Even though I was physically fit, the choreographies weren’t exactly easy. Prior to a race, I’m always confident that I know my sport through and through, but when it came to dancing I always had other thoughts in the back of my head, like ‘hopefully I don’t embarrass myself or make Florian trip’. But I quickly improved and got to feel quite comfortable on the dance floor. In the end, I was quite proud of myself! Another challenge was training in front of the mirror, where you are in a constant battle with yourself. Dancing is a beautiful sport that also forms the body beautifully, but I prefer to put on the running shoes.

You completed your MBA degree and also give presentations on the topics of motivation, performance pressure, victory and defeat — topics that accompanied you for years as a ski racer. How much did skiing shape you?

As a ski racer, you feel the pressure to perform from childhood onwards. That is really something that shapes and forms you. When you’re leading in the second run and know that you have to win gold now, then you really feel that pressure. Especially also because your performance is always broadcast to the public via TV. I also wrote my master’s thesis for my business degree on this, drawing comparisons to business. I am very thankful for these experiences, because today I know that I can rely on myself, even if the pressure is high. 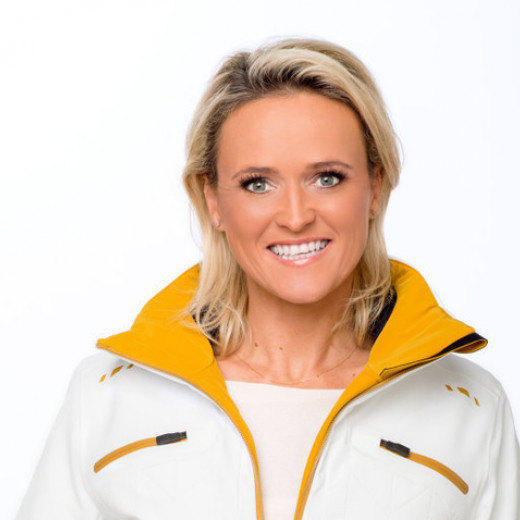 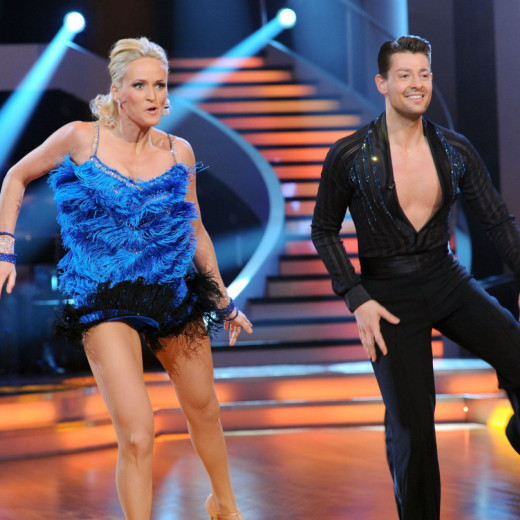 For 17 years, you hit the icy slopes at 130 kilometres per hour — do you live with less speed these days?

(Alexandra laughs) Not really! Intense speed still dominates my everyday professional life. But this is exactly what I need and want. There also phases where I calm down and retreat. Then there aren’t any appointments for a while — but daily exercise is still part of it. I love being outside in nature and just relaxing. I live in the city of Salzburg and love being at home or going out for lunch or dinner with friends.

Since 2006, you’ve been a co-owner of the “Genussproject” (Pleasure Project) restaurant in Salzburg — what does pleasure mean for you in your daily life?

Pleasure means quality of life and is extremely important to me. Occasionally, when it gets busy, I love to enjoy a little treat! Then I go shopping or eating. It doesn’t have to be an award-winning restaurant — I love going to a nice tavern just as much. The quality has to be right. But in this matter, we’re blessed in our region anyway — I’m always blown away by the kinds of dishes that are offered at our mountain huts.

After a day on the slopes into the mountain hut, which dishes do you find simply irresistible?

Kaiserschmarrn! When my friends and I make our way into a ski hut, we first have something savoury, followed by a big portion of Kaiserschmarrn!

Do you have a favourite slope among the Skicircus’ huge selection?

That’s a tough one! Back in the day, and due to the many training sessions spent on this mountain, it was undoubtedly the Zwölferkogel. But when I cruise around the Skicircus these days, I just can’t make up my mind. The Schattberg-North-Descent is highly athletic, but even the sunny side excites me. There, I like to just take a break and enjoy the incredible vista. Leogang also has wonderful slopes, and Fieberbrunn, with its incredible freeride offers, opens up entirely new possibilities. In my opinion, everything is on offer here, and even after a week in the Skicircus, there would still be slopes left for me to discover. Another thing that’s important to me is that I don’t need a car, as everything can be reached quite easily by foot.