Freeriding in the Home of Lässig → Here’s what you need to know!

Perfect pow* — what more could a winter sports fan ask for? And the ingredients for the perfect powder snow are actually quite simple: a solid base that covers any and all sharks* and offers sufficient support, around 30 centimetres (ideally more) of recent, cold snow, the perfect terrain (also optional, although the steeper the better) and then a dash of bluebird* as the cherry on top. When all the conditions turn out just perfect the freeriders would say: the season delivered.

And thus, the average shredder (not to be confused with a local* or the ski bums*) probably spent the last couple of winters wondering whether he or she had bought all of those fancy freeride skis with 120mm under the binding and the pricy ABS backpack for nothing. After all, no matter how perfectly groomed the “official” slopes are: What every freerider truly lives for is “offpiste” riding! In the end, the Snow Queen finally came to an agreement with the backcountry enthusiasts and started dropping powder bomb after powder bomb this year. Time to get reckless! Like a person dying of thirst in a desert finally coming upon an oasis, the ski fanatics hike* and shred* anything that remotely looks like it could be something to make their lines9 in! Unfortunately, recklessness and carelessness are exactly what you should not bring along on a powder day like this — what’s required instead is careful preparation and the right know-how. One of those guys who know almost everything there is to know about having fun in the powder snow, but is also familiar with the risks and how to avoid them, is the head of the Freeride Skischool Saalbach, Stefan Baumgartner. Stefan is a state-licensed ski teacher and ski guide and has been an avid freerider for many years. Here, he tells us what one needs in order to have as much fun as possible while staying safe too! 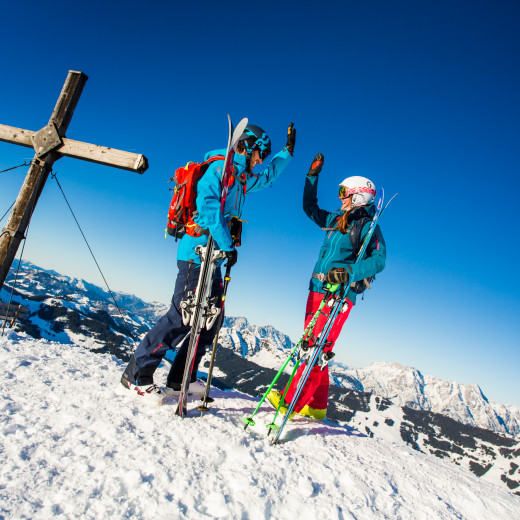 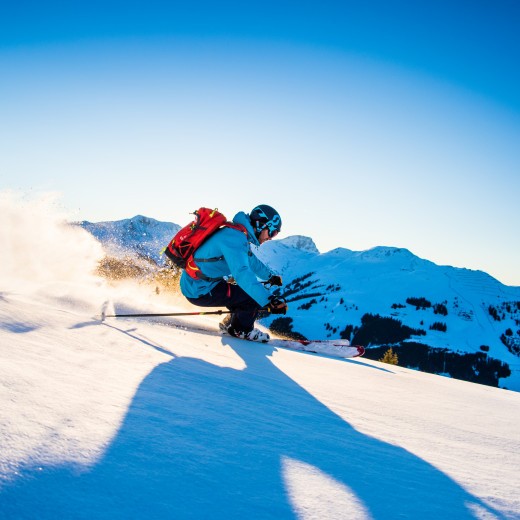 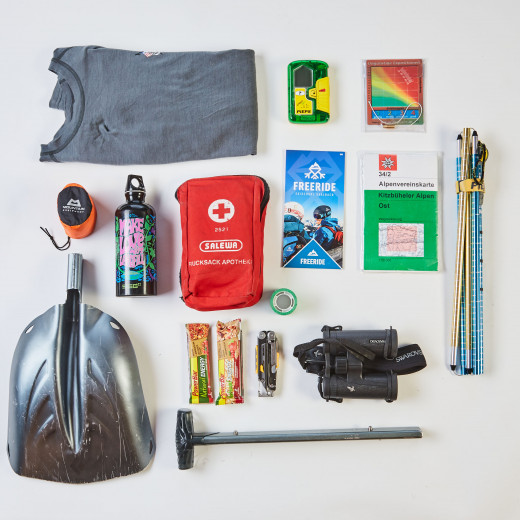 Packing my backpack for freeriding...

You can basically use any skis to make your way to the open terrain, but especially with fresh snow, it’s way more fun if your skis are more freeriding-oriented. In other words, a wider and more innovative (rocker9-focused) shape. That way, you get more uplift and can also ride without having to repeat the standard plait pattern into the snow over and over again. When it comes to the poles, make sure to choose a pair that’s telescopic and has large baskets — just in case you end up having to push yourself out of somewhere (which happens rather frequently in backcountry areas!).

The avalanche transceiver is the biggest and most indispensable necessity if you want to be out and about on in the snow. No excuses! In the worst-case scenario, you will neither be able to find your buried skiing partner, nor will you be found (alive) yourself unless you have an avalanche transceiver on you. The device is not a stylish accessory but a “tool” which you should regularly work and practice with. Grab a few friends, bury a couple of backpacks in the snow together with the avalanche transceivers and get searching. Everyone should know their own transceiver well enough that using it is like a reflex in case it gets serious. A good way to practice are the LVS Search Fields powered by ORTOVOX at the Schattberg mountain and at the Zillstatt Lift. Here in the search field, you activate up to four of the six buried transmitters and use the detection device to find them within a limited period of time. You will find LVS checkpoints throughout the ski resort near selected mountain stations where can test your avalanche transceiver’s transmission capability while passing by.

An avalanche backpack should be part of any solid safety kit, especially when out and about on freeride skis or via snowboard in unsecured terrain. Avalanche airbags integrated into the backpack provide additional safety in the backcountry. The backpack — whether with or without ABS — must include both an avalanche probe, which is compulsory in the open terrain, as well as an avalanche shovel.

Rough localisation of a buried person is carried out via the transceiver, whilst the avalanche probe helps locate the person more precisely. The probe determines both the location as well as the exact burial depth. The avalanche shovel is also part of any standard safety kit. Ideally, it is a telescopic light metal or aluminium shovel without any sharp edges.

A first aid kit — a complete kit with additional utensils — also belongs in the backpack. A bivouac sack can also be handy, especially if someone is injured and/or needs to be protected from the wet and the cold before evacuation. Packed up, they are both very small and can easily be stored in your backpack.

They say to never walk alone but it’s even more important to never ride alone! When you’re skiing in backcountry regions, you should always have a mate by your side. Even if you’re “only” riding a couple of hundred metres next to the slope, you should know that people often won’t hear you if you’re injured or lose your way. Mobile coverage could drop, and nobody wants to end up in a situation where they’re sitting alone in a ditch, injured. And, after all, happiness is only real when shared with others anyway. What’s cooler than hanging out with your friends after a great day and talking about the awesome lines that you made in the fresh pow?

…what else you should do:

You should check the avalanche status report for the day no later than during breakfast (and once more around noon — at 12:00 there is a status report update), services are:

If you would like to read even more on the subject of snow and avalanches, the book “3x3 Lawinen” (German) by Werner Munter is an absolute classic:

Other than that, there’s not much left to say, except: Have fun out there! Having the basic know-how as well as knowing how to apply it is key. It doesn’t hurt to take an avalanche course early during winter, local mountain rescue services and freeride schools provide them regularly. Highly recommended is also the participation in one of the many avalanche camps in the Home of Lässig. Join like-minded freeriders and learn the most important fundamentals for riding in the backcountry.

Sharks: boulders or rocks only lightly covered by fresh snow

Bluebird: The first day of good weather after several days of heavy snowfall

delivered: You got what you wanted: lots of pow, great lines and a few bluebirds!

local: The people who know the secret spots to shred

Ski bums: Usually Scandinavians or Brits who have come for the winter holiday of their dreams before starting university, can be spotted by way of their brown faces and their countless days spent at the mountain. Think they know every secret run!

hike: Climb the mountain with your skis strapped to your backpack

shred: Riding down a slope without using the old “plait technique”

lines: The fresh traces in the deep snow

Rocker: Skis without pre-stressing, similar to a stave

Safety Camps in the Home of Lässig

Two are better than one

Lulu Brinkschulte
added to watchlist
Back to Overview