Always on the alert

“Beep, beep, beep” — the piercing sound of the incoming text message interrupts the silence and the display of the smartphone lights up in the dark of the night. Within seconds, they are up on their toes, update themselves on the situation by reading the alert message and grab their equipment and then take off. Into the night, facing cold and unknown dangers, to save mountaineers from their woes. The relaxing times, the warmth and the comfort, have to stay home.

No concerns about the next generation

“Alpine emergency without injuries” is the most common type of alert message during the winter period, explains Sepp Mitterer, who has been the head of Saalbach Hinterglemm’s mountain rescue team since 2012. The base in the Glemmtal valley counts around 36 active members and the members of the voluntary team are not concerned about the future generation, as Sepp Mitterer says: “We have many excellent young mountain rescuers on our team. Of course, we also benefit from the widespread mountaineering proficiency in the region. The young folks are already passionate mountain climbers anyway. We just get in touch with them and ask if they would like to join us.” Markus Mitterer agrees. The 40-year-old laughs and says, “My father is also a mountain rescuer, so it was pretty obvious from the beginning that I would step into his footsteps eventually. I was a little hesitant at first, because I was worried that I wouldn’t have much leisure time left if I constantly had to make my way up to the mountain. But I quickly realised that working with the group and going through training together with like-minded mountain aficionados would enrich my life tremendously. Today, I’m a certified mountain guide and also work around the mountain professionally.”

The training consists of three modules - ice, rock and winter.

Those who are accepted into the ranks of the mountain rescuers have to go through an extensive training programme. Sepp Mitterer explains, “Of course, physical suitability and mountaineering experience are the base requirements. The minimum age is generally 17 years. However, we like to wait a few more years until the applicants have finished school, the armed forces or vocational training. If they are already working, then they usually know whether they have time for exercises and for the training and if they are willing to invest the flexibility and the commitment. That keeps the incidences of absenteeism very low and the young people stick with us.” “Mountain rescuing is not a hobby. It’s a passion and a way of life,” says Fritz Steger, who has been a voluntary mountain rescuer since 2011, and the 24-year-old adds, “Training is divided into three blocks and selection already takes place during the first course. Every week, we’re taught about the mountains, the ice and the winter, both theoretically as well as practically. Training also included a four-day-long alpine medical training session. Next to the physical abilities, one’s psychological suitability is also rigorously tested. You have to meet certain criteria and every block ends with a test. Additionally, we also participate in around 25 hours of exercises at the local base every year. And just as important as one’s physical suitability, athleticism and resilience is time availability!”

Even the most athletic mountain aficionados with the best abilities won’t be of much help to the mountain rescue team if they don’t have sufficient time to join regular deployments. But Sepp Mitterer knows to pay close attention to this during the selection process and points out, “Markus, for example, isn’t available much during the day as he works as a mountain guide. But then he joins us on evening and night deployments. Working as a chef at his parents’ hotel, Fritz has limited availability during evenings, but gladly assists us by day and is usually the first to arrive at the deployment location thanks to his motocross motorcycle. As a result, we have a diverse mix and whenever an alert comes in, I can rely on the fact that a sufficient number of mountain rescuers will show up at the meeting spot. An employee who has to drop everything to save someone from an emergency situation has to receive full cover from his boss and his co-workers. We are very thankful for the fact that all companies are on our side here. But we also receive support from our families which we often have to leave behind in the middle of the night or during a relaxing meal in order to go help somebody in need.” 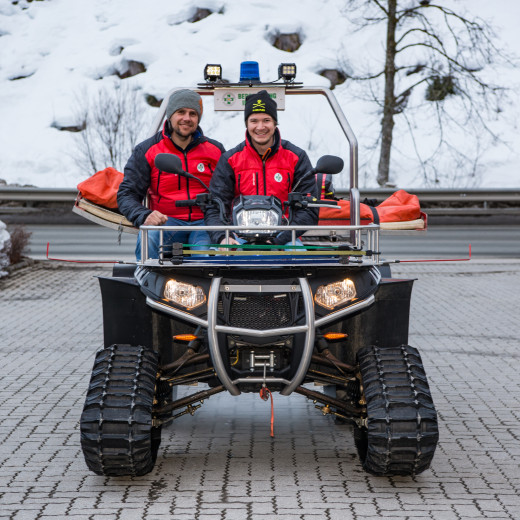 The quad is an important emergency vehicle.

The official equipment of mountain rescue 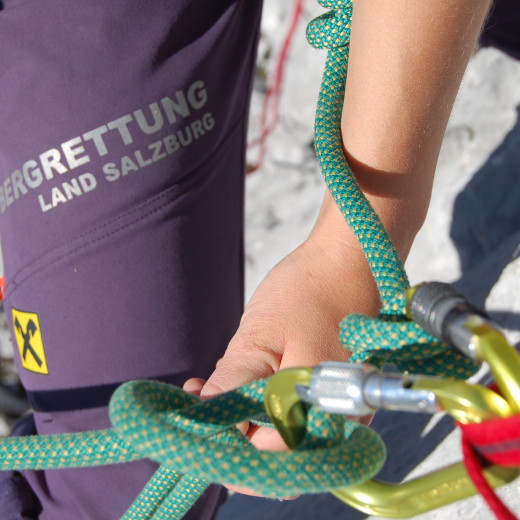 The rescue out of difficult terrain is being trained at the courses.

Basically, anything could happen at any time. Whether summer, winter, day or night — the mountain rescuers are always on the alert and the deployment backpack is always packed and ready to go. The alert to the local base is carried out through the office of the Red Cross. This is when Sepp Mitterer gets a first overview and informs his team about the text message. “The text message includes information about what kind of emergency we’re dealing with. During the winter, it’s usually an alpine emergency without injuries — an example would be people getting lost in a trench during the descent and not being able to get out anymore. The meeting spot is also communicated and, starting at this moment, deployment starts.” “Honestly, does it ever happen that you have to give yourself a little push when an alert comes in? For example, if you’ve just gotten cosy on the sofa with your girlfriend after a tough day at work and suddenly the alarm beeps. Outside it’s cold and nasty and you might even expose yourself to real dangers. Does one ever regret becoming a mountain rescuer?” is what I want to know. The young mountain rescuers laugh and admit, “Sometimes it’s not all that easy. But this is precisely why we became mountain rescuers in the first place! And once you’re on your way, it’s alright. The victims are often scared and in pain — so it goes without saying that we can’t just stay on the sofa. It’s amazing to be able to help somebody in need. We’ve got the skills, the geographic knowledge and the equipment to help — and so that’s what we do with each deployment.”

Support from the municipality and the cableway company

With the help of the cableway company and the local municipality, the mountain rescue team was able to acquire a deployment quad bike. “It happens quite often during the winter that our mountain rescuers just happen to be skiing at the time. If they then suddenly receive an alert about an avalanche, they can pick up a ready deployment backpack packed with a transceiver, a probe, a shovel at each cableway mountain station in Saalbach Hinterglemm Leogang and Fieberbrunn and are thus always at an advantage when it comes to time. The deployment backpacks were financed by the cableway company and make our work a whole lot easier. The support from the cableway company and the municipality are the foundation for our work,” says Sepp Mitterer. The building for the local base, the quad bike and a deployment jeep have all been provided by the municipality of Saalbach Hinterglemm.

Following deployment, the team gathers back at the base. Especially after stressful deployments, it is important to offer the mountain rescuers time to talk about the events. Sepp Mitterer has experienced many tragic deployments in his time and reveals, “Community is key when it comes to processing our experiences. We have a psychologist at our disposal at all times who may not be able to lift the burden entirely off our shoulders but can show us how to deal with it. Some deployments stay with us for a long time. But there are also many positive experiences, such as when the rescues were successful. After deployment, we also discuss the course of the operation and give each other feedback.”

The young rescuers are being well trained.

Tips from the mountain rescuers

Time is of the essence! Thus, it is key during deployment to know the exact location of the injured or lost person in order to be able to help without wasting too much time on the search. Fritz Steger explains how anyone can use their smartphone to find out their location: “You will find the compass among the utility apps — here you can also find your exact GPS coordinates. Simply taking a screenshot and sending it to the mountain rescuers sends them a clear signal. If you have the app Whatsapp installed on your phone, you just need to click on the “+” symbol next to the entry field. Then you can select your location, which is another way of quickly forwarding it to the mountain rescuers. The app from the Austrian Alpine Club has the same function. The official Saalbach App comes with an SOS button that leads you directly to the emergency call function including GPS data. Starting this summer, you can find your coordinates on the yellow signpost should you get lost while hiking. Very important if you want to be able to send an alert should it become necessary: Start with a fully charged battery! Or, in case it is very cold or you’re going on a longer tour, pack a spare battery or a powerbank in your backpack.” During winter and summer, the deployments increase significantly, which Sepp Mitterer explains as follows: “Mountain sports are booming. The hiking and winter sports enthusiasts may be better equipped than ever, but even the best equipment doesn’t replace proper planning! They are also becoming more adventurous and often overestimate their abilities or aren’t sufficiently aware of the potential dangers.” The costs resulting from a mountain rescue deployment are covered by the mountaineer. A mountain insurance, as it is included for mountain rescue sponsors or as part of an Austrian Alpine Club membership, covers these costs. The money is invested in training and equipment. The mountain rescuers carry out their duties on a voluntary basis and Sepp Mitterer laughs, “We don’t make any money — on the contrary. We invest our own money into the mountain rescue uniforms and the skis, don’t charge for driving to the deployment location and also pay for our training. But what we usually do get is the gratefulness of those that we rescue. And as a mountain rescuer, that’s what it’s all about.”

Ripples in the snow