Rescuers from the sky

The rescue crew of the Martin 6 provides quick support in the case of an accident on the slopes of the Skicircus Saalbach Hinterglemm Leogang Fieberbrunn and beyond. “Saalbach Stories” visited the crew at the helicopter base in Hinterglemm and took a peek behind the curtain of everyday rescue operations.

7:00 in the morning. It’s still dark as I approach the hangar, closely located to the west summit, during a heavy snowstorm, but the base is already lit up and bustling. The crew—consisting of a pilot, air rescuers and emergency doctors—are currently conducting their routine morning checks on their helicopter, the equipment and the medical supplies. Pilot Shannon Harding, a native South African and part of the team since the last three years, has spent the night at the base. He takes weekly turns with pilot Hanno Berghofer. After verifying the helicopter’s operational readiness, he starts up the mountain tractor. “Next to the helicopter, this is our most important machine,” the pilot says laughingly as he starts freeing up the exterior part of the hangar from fresh snow with it so that the helicopter can be pulled out of the hangar for a new assignment.

Meanwhile, Toni Voithofer checks every alpine device on board. He is the crew’s leading air rescue paramedic and has been working at the hangar in Hinterglemm for the last 12 years. As an air rescuer, Toni Voithofer is not only a long-time emergency paramedic at the Red Cross, but has also completed mountain and air rescue training. “We had a rope rescue yesterday,” he explains as he carefully packs the ropes and the versatile cord back into the helicopter. “The refuelling of the helicopter is also part of an air rescuer’s job and that is normally taken care of right after returning from a deployment so that you’re ready to go again in no time. The machine is checked before and after deployment. Our inspections are absolutely vital,” he says as he climbs on board to check the stretcher as well.

The third crew member on duty this day is Dr. Katharina Spora, the leading emergency doctor. “It has always been my dream to work at the air rescue centre. Next to my full-time position at the Innsbruck Medical University, I come here to the hangar in Hinterglemm for two to three shifts per month. I too have completed an additional alpine training for my work here,” she explains, while getting the big red doctor’s backpack out of the helicopter. Although this emergency backpack also gets restocked after each deployment, a thorough check is simply part of the morning routine. Focused, she eyes the different vials and utensils inside. Impressed, I watch how confidently and quickly she finds everything in her backpack, and she laughs, “Every emergency backpack is sorted according to the same system. So I know exactly where to find everything when I open it. Working in the field is a challenge, because, as a doctor, you’re often alone with your patient and the cold and the wind can make intensive care difficult. That’s the big difference between this work and the work in the hospital, and yet I always begin my shift here with much excitement. Now I am just going to check the medical equipment on board.” 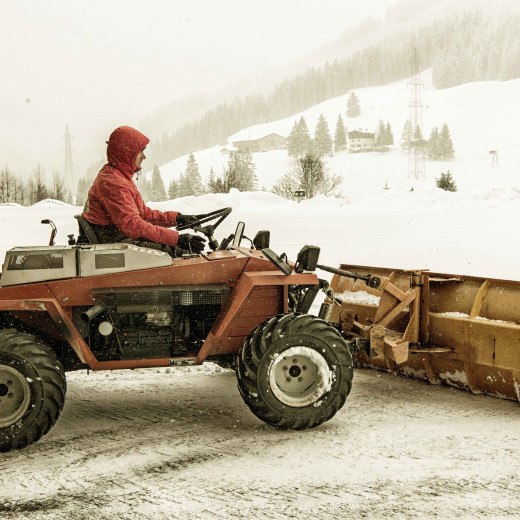 Pilot Shannon Harding clears the snow with a tractor. 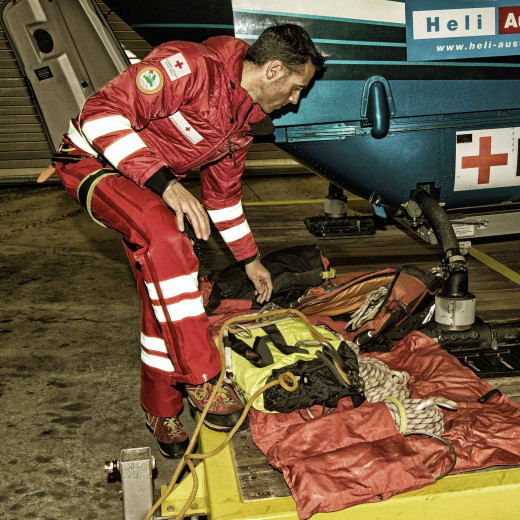 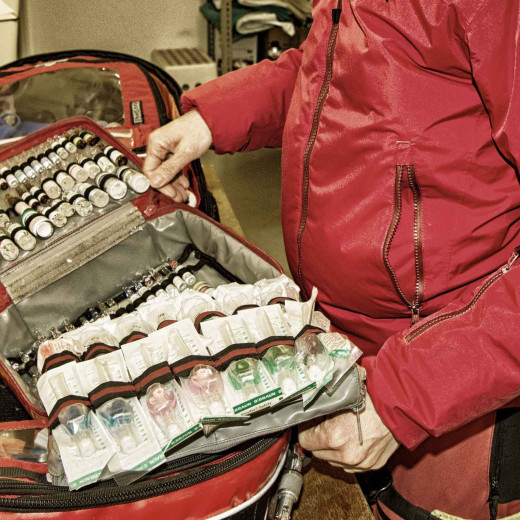 Toni Voithofer refuels the helicopter after a rescue mission.

After the daily checks, the crew meets in the base’s common room. Everyone is fully equipped and Toni Voithofer explains: “Seatbelt, radio communication, avalanche transceiver and firm mountain boots are worn to the very end of our service. After all, we never know what kind of assignment awaits us, so we always prepare for any occurrence.” Pilot Shannon Harding has already pulled up all the necessary information for the flight preparation on the computer. He checks the webcams of the deployment location, reads weather maps and calculates the combined weight of the helicopter for the upcoming assignments. Meanwhile, air rescuer Toni Voithofer reads the current avalanche reports, and at precisely 07:30 he informs the control centres in Tyrol and Salzburg about helicopter Martin 6’s operational readiness.

Now it’s time for a shared breakfast—provided that no assignments are called in via radio communication. But with a look outside the window, on the still raging snow storm, pilot Shannon Harding concludes, “Right now we wouldn’t even be able to take off due to the low visibility. I am completely responsible for the crew during flight and our safety is the number one priority.” The rescue helicopter MD902 Explorer has been stationed in Hinterglemm since 1 December 2014. Everything that might be necessary for the intensive care of a patient is located on board. The operator is the local company “Wolf Helicopter” and the flight operations chief is Heli Austria. Throughout the entire year, the base is manned by the crew every day from 7:00 until the evening hours, and on busy days the helicopter takes off for rescue missions up to nine times. 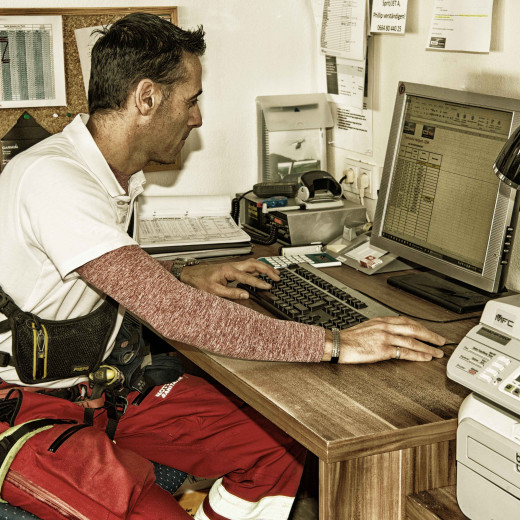 Paperwork is also part of the daily Air-Rescue-business. 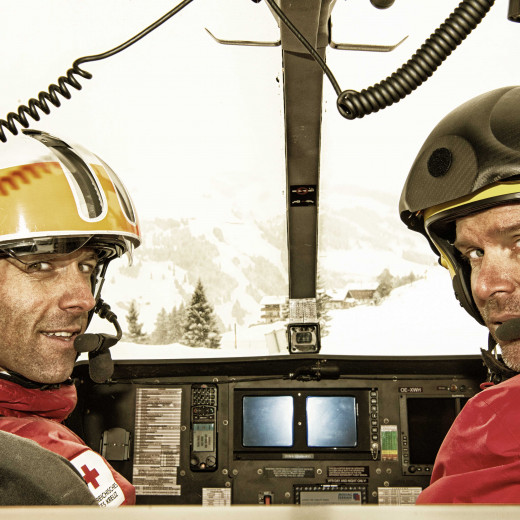 Pilot Shannon Harding and Toni Voithofer are a well-established team. 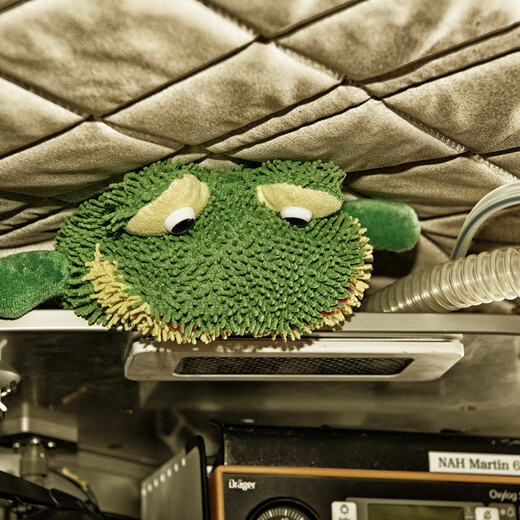 The „4th crewmember“ hides in the helicopter and takes fear away from kids.

Tony Voithofer explains the deployment procedure: “We are alerted by the control centre, which was previously called by ski patrol or the victim via 144. The air rescuer and the pilot get the machine started immediately and the doc presses the emergency-off button, which switches off the electricity in the base. This is to make sure that we didn’t forget to turn off a stove during the rush of leaving the base. After around 30 seconds, we’re already in the helicopter and the rotor blades start turning. We can reach any point in the Skicircus within five minutes. The doctor can already prepare for the assignment with the initial information that we receive about the accident, but we never know for sure what kind of challenges await us and there are definitely no routine jobs! In an ideal situation, there is a ski patrol officer to lead us to a secured landing site close to the patient. This is important, because the downdraft of the rotor blades can create a “whiteout”. Then, the pilot depends on the pathfinder as a reference point. If landing isn’t possible on the terrain, the doctor is dropped off mid-air and then we look for a suitable landing site. Then I prepare everything for a helicopter rescue and decide the appropriate rope length together with the pilot. After the initial first aid, the patient is placed into the rope sack and then transported together with the doctor to the next landing site by the air rescuer. That’s where the patient is loaded into the helicopter and finally flown to the hospital. I coordinate with the control centre and transfer our data to the hospital so that everything can be prepared for the arrival of the patient. While the emergency doctor hands over the patient to the doctors at the hospital, I load the replacement stretcher from the hospital into the helicopter. Because, after the assignment is before the assignment, and we can be called for a new deployment at any time. Meanwhile, the written documentation of the deployment is taken care of. We log all the details—from the flight time to the medical details.”

Deployment for Martin 6: from standby mode to 100%

The crew is a well-coordinated team, and the common room is a place for jokes and laughter. “That’s important, because as soon as one of the pagers beeps, we have to be able to blindly trust each other. Within a second, we switch from a relaxed standby mode to 100% concentration. Then, every grip must be tight and we support each other fully. After strenuous deployments, we like to sit together to just talk about it—that really helps,” says the emergency doctor. By now it’s noon, the weather has calmed down and the team orders their lunch from a nearby tavern. “Roast pork with dumplings and cabbage,” announces Dr. Katharina Spora enthusiastically. But when the hot and steaming dish finally arrives on the base’s table, one of the pagers rings an urgent alarm sound. The radio transmits: “Deployment for Martin 6…” and without hesitation, the crew jumps and is on their way to the day’s first deployment. The roast pork steams away solitarily and has to wait for the team to return later on. This too is part of the rescue team’s everyday reality.

Photographer Richard Ronacher from Viehhofen created a film about the air rescue Martin 6 in Hinterglemm. The film shows the work from the initial alarm to a rope rescue.